It's been quite some time since I've sewn anything for sale but the lure of being part of a Gossamer Dreams stocking was enough to tempt me to dust off the machines.  Well, they weren't actually dusty as I have been sewing these last few weeks .... and they do both have dust covers to live under.

With the theme being Ocean Delights, a few sneak peaks from some talented ladies told me mermaids were the order of the day.. so I decided to go for something equally girly but a bit different, and it has been so long since I've done a pinnie.  I decided to go for a seahorse, as they are by far my favourite sea creatures.  I used to have a tank of them in our lounge room and loved watching them dance and swim and cavort. Yep, seahorses do cavort.  I'd been sewing Lily a dress with the Patty Young 'mezzanine' range and it seemed just perfect for capturing seahorse hide and seastar skin. 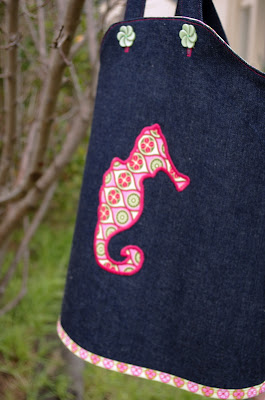 A bit of bias binding making and the perfectly matching green buttons and it was complete! 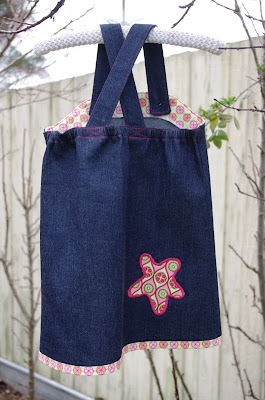 I'm pretty pleased with it. As I was taking these photos Toby wandered outside, saw the dress in the tree, said "ooooh!!!" and proceeded to try and take his clothes off. Obviously, he wanted it on. I'm  a nice mum, so I obliged (secretly thinking, hmm, it's been a while since I sold one of these so I modeled photo won't go astray).  The headband, I must admit, was my idea at an attempt to make him look a little girlier. He liked, and was a really really obliging model. Much better than the five year old. He didn't flash his knickers for starters. 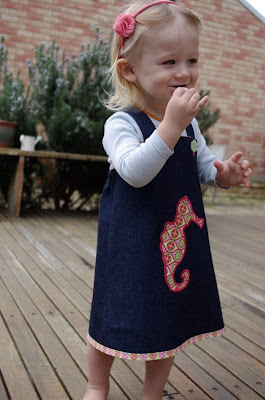 He doesn't look too much like a boy does he?

Andy actually saw this second photo and thought it was an old one of Lily!!! 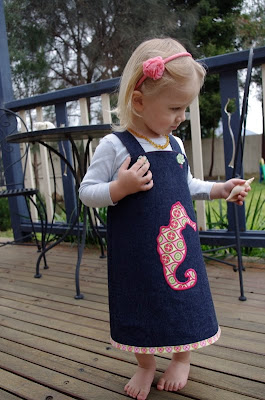 Also for the stocking, I made a pair of fleece longies complete with a little boat applique. 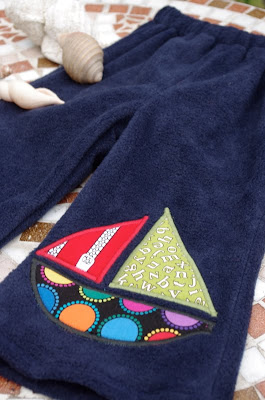 You can find these goodies and plenty of other awesome goodies from some very talented WAHMs (including some rare painted tees from pint!! )over at Gossamer Dreams 8pm AEST tonight!!!
Posted by tikki at 3:17 pm 4 comments

because it's simply not true that I don't sew anymore, here are some WIP photos.... 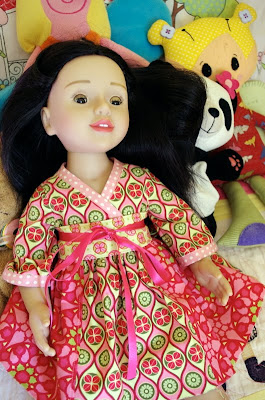 Jasmine is sporting an almost complete mini kyoto .  Almost complete. as I have a couple of steps to go:
1. Bind the hem with the same bias binding as sleeves and bodice.
2. Finish back opening with velcro.

So for those who've wondered, if the mod kid patterns fit the Australian girl doll, yes, they certainly do! 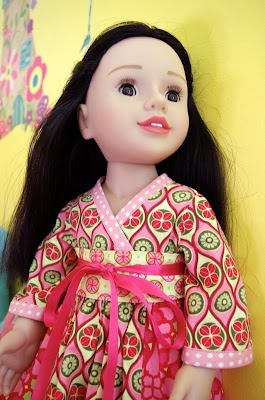 The lack of bias binding is also responsible for this: 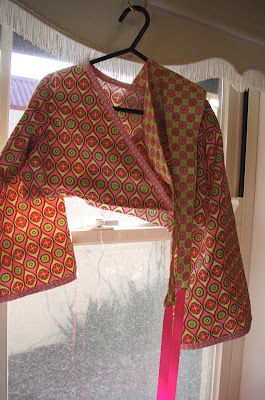 the unfinished matching version for the doll's owner, Lily.
(they're constructed slightly differently which meant I could add the skirt to Jasmine's dress but not Lily's...


more creative spaces over at kootoyoo
Posted by tikki at 4:04 pm 4 comments