Today I found this in my "space";  a pair of jeans left there by my husband for me to fix when I has some free time in my sewing room.  ahem, yes, well. I might surprise him and fix them this week.  Andy has attempted to mend his own jeans in the past, pre-kiddies when we were still young and fancy-free I caught him planning to patch a pair on his mother's overlocker PMSL Clearly he had no idea what an overlocker actually does. 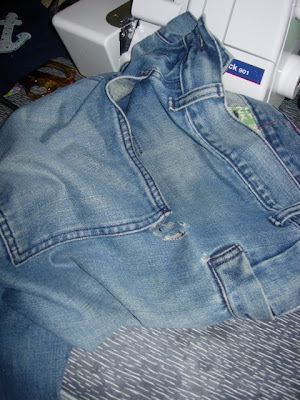 This however, is a far more pressing mending job that does need my attention... bugger, huh. How much I do love these socks and how very sad was I to find a big run in them.  Now to decide whether to darn or frog back and reknit.  *sigh* 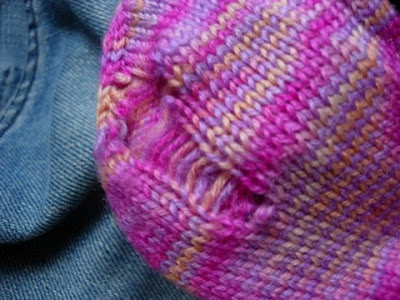 This week I have been doing a little bit of sewing, yay!!!  Toby has been happily dismantling the book shelf repeatedly while I sew away. I've had these fleece longies cut out for months and months, well before Toby was mobile, but sewing time has been alluding me.   Anyhoo, hoping to have these finished and up in the shop pronto. Hopefully it's not too late for this winter season. 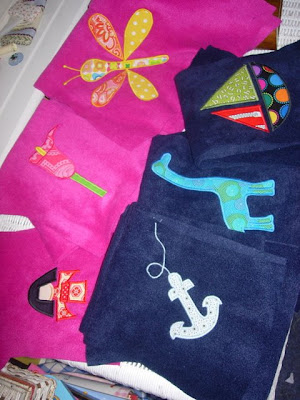 More creative spaces to be found over at kootoyoo
Posted by tikki at 5:18 pm 6 comments

Daddy will be so pleased ... 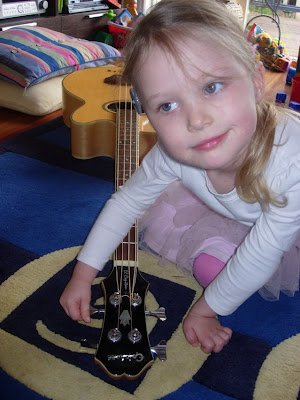 "I'm just helping Daddy tune his guitar," says Lily.
And Andy was wondering why his bass was so wildly out of tune....
Posted by tikki at 3:09 pm 4 comments 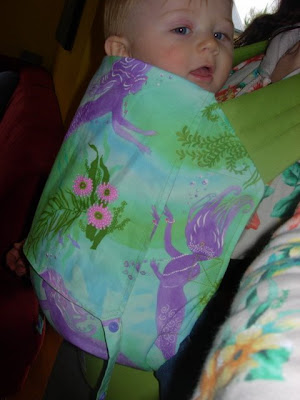 I don't usually do this meme, but had to share what I'm wearing today... my new (well, new to me) Olives and Applesauce Soft Structured Carrier (hereafter to be referred to as the O&A SSC)
LOVE (1000)
so comfy, great freedom of movement, particularly while front carrying. I tried this little baby out with Lily on my back and then Toby on my front, and it was fabulous; well, except for Lily wanting me to pretend I was a horse.
Far more interesting than my surf brand hoodie I reckon.
Did I tell you this was my new favourite carrier?
Posted by tikki at 10:09 pm 3 comments

You know those times when you just have to escape, get away?  We had one of those moments last week so took a hastily organised trip to the bush block. *ahhhh* just exactly what we all needed after the hectic weeks of late.
Time to get away from modern life and just relax in the peaceful surrounds, no one for miles. Enjoying the moment. The quiet. And each other's company. 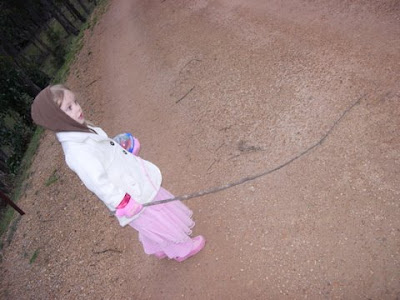 Indeed, it was quite chilly, very insanely chilly in fact. Quite a shock to the system to begin with I tell you. There was no venturing outside unless you were well rugged up for the elements.  And properly attired, there was plenty of exploring to be done. 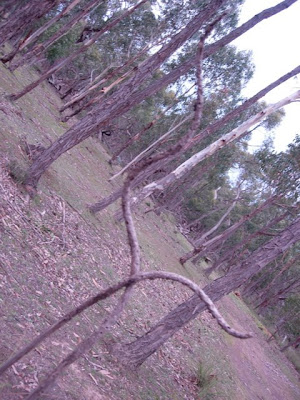 The pint family came to join us, always up for a thrown together get away.  It was cosy in our little shack but we had a wonderful time as always.   But gee, did it rain... and rain ...  and rain... and then rain some more!!  The rain gauge told us we had 38 mm in the time we were there.   Sounds impressive to me ;) 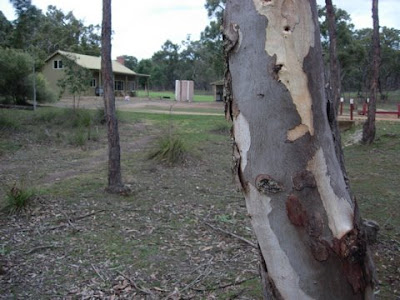 So for this little fellow the only outside exploring to be done was in the ergo, with the rain he became pretty much shack bound. Not that he complained, he got to scour the shack's floor in search of anything he could find to put in his mouth.  And smile at little Sage. 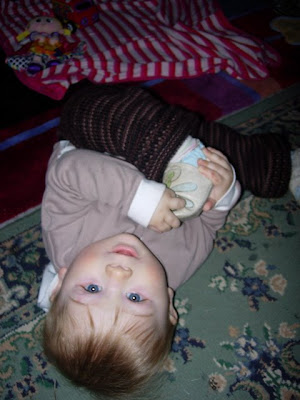 The bigger kids got to explore in breaks in the rain, and how glorious it is to explore the bush after a rain storm. I love how rain brings the bush alive and transforms it into something spectacular. The colours, sound and whole atmosphere is magical. 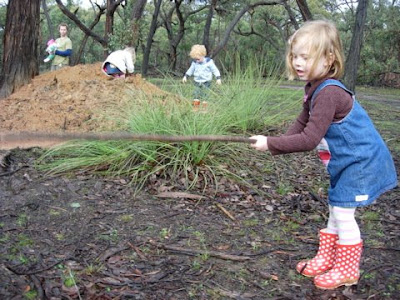 There were plenty of sticks to whack with and plenty of puddles to investigate. 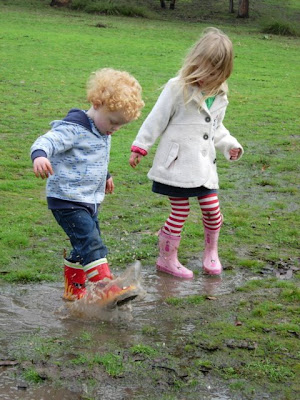 And even some sheep to feed some apples to. These guys must be the tamest sheep around. Oh, and there were some way cute lambies as well, including a set of twins!! 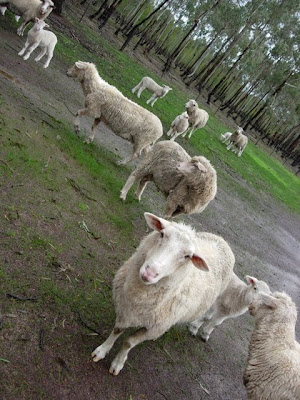 A great break, batteries recharged after much chai sipping, back warming in front of the fire, knitting and chatting away the hours.  Not to mention a brewsky or two.
Posted by tikki at 12:48 am 4 comments 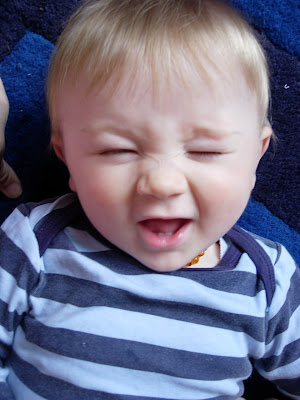 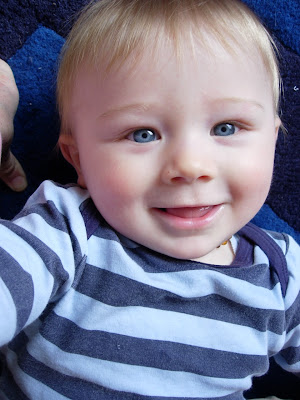 You want a smile, huh? 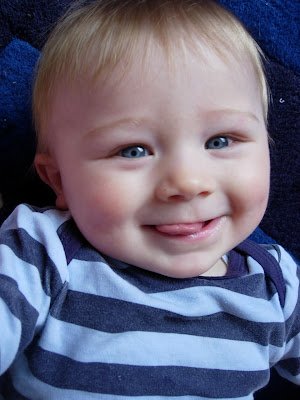 Nah! Too cheeky for that! 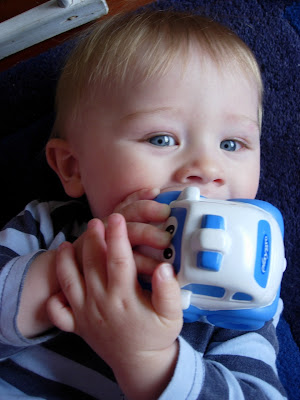 This week I've been attempting to reclaim my sewing room back from the ever encroaching kidlets.  I've tidied, evicted dolls and soft toys, picked up a billion picture books... repeatedly, subtly snuck out the jigsaw books (Whoever invented jigsaw books really needs to take a good hard look at themselves, they seriously drive me insane!!!)  and probably restacked my ottobre pile about oh, at least three times a day. Toby is rather fond of dismantling them from the bottom shelf of the bookshelf.
Finally nice and tidy I sat in there today for a bit of "me" time.  Two simple tasks to do; the first one choose a button from the three selected for this scarf.  I needed a chai to accomplish that one. See my cute knitting cup? My lovely sister Megsie gave me that. 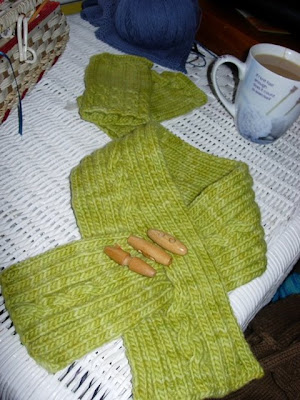 The second one was to arrange some charm squarms for a little quilt top. I got them laid out but then Toby attacked and crawled over it, plonking his butt in the middle before attempting to eat the squares.  *sigh* So needless to say, that didn't get accomplished. 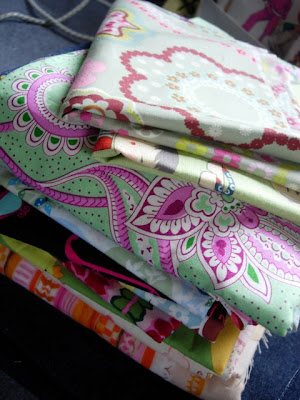 Oh well, at least I had a lovely cuppa while I stashed some new fabrics and discussed with Miss Rainbow what to do with this: 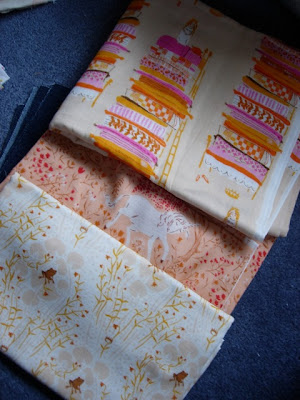 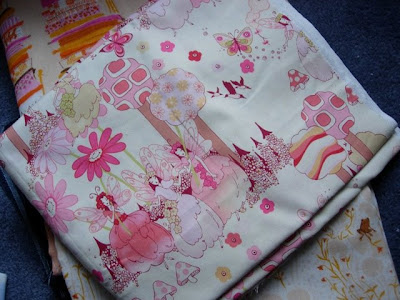 more creative spaces over at kootoyoo
Posted by tikki at 5:33 pm 4 comments