I love a lazy Sunday afternoon.
An afternoon of quiet sunshine interspersed with some rolling thunder and autumn rains.
The kids settled into an afternoon of imaginative play, with sticks and capes and lots of co-operation.
A hot cup of chai.
Some yarn to play with and the last of the easter chocolate.

This afternoon I'm sharing my love between crochet and knitting.
Last night I started crocheting a cushion cover out of some glorious noro. Gosh, I do love noro.

This afternoon I wound some more skeins of WOOLganics Head, Heart and Hand into balls to keep working on Lily's log cabin blanket.

How are you spending your Sunday?
What are you working on?
Do you scrounge the hard rubbish collections too? What's your best find?

- Posted using BlogPress from my iPad
Posted by tikki at 4:00 pm 1 comments

After a bit of a break from designing at the start of the year, I've finally gotten back into the swing of things with the release of two new patterns. woot! Two patterns that are both for grown up people, rather than wee little kiddies, which is a bit of a change.

The first of these was lavender which was released in March. 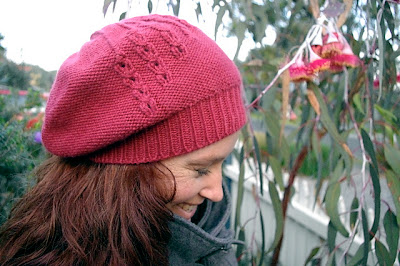 Lavender is a quick and fun little knit that is written up for two head sizes (20" and 22"). What I really like about this design is that it is all knit inside out. What the? Look closely at the hat and you'll see that reverse stocking stitch features heavily. If this was knit rightside out, that would be a heck of a lot of purling going on. But inside out means you just knit. Cool hey.

It's a bit of a trust the pattern, because of the way you're knitting the cable inside out. The cable are very simple and intuitive though, and is easily worked without a cable needle. Little mock cables, got to love them! 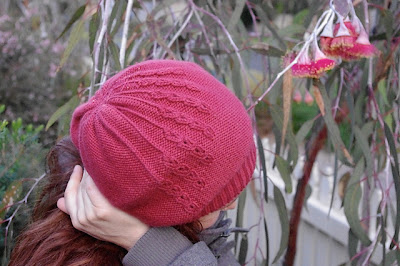 The idea for this hat was first conceived as a chemo cap for a loved family member. My aim was to create one that fitted all the requirements of a sensitive scalp; the softest organic yarn possible, a gentle rolled edge on the band, slouchiness to minimise contact but yet provide warmth, and in reverse stocking stitch, so the softest side of the knit fabric is on the inner.

After knitting it I decided it was really perfect for anyone!

The mock cable stitch pattern I used reminds me of lavender drying upside down; hence the name of the hat. The first one I knit was actually in a lavender yarn.  Lavender for me, means calmness and serenity... which is just what every knitter wants! 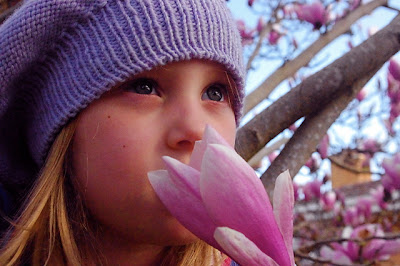 It's been fabulous seeing some gorgeous lavenders popping up on Ravelry, I'm looking forward to seeing many more.

And just so you know, if you've ever purchased a pattern from me before, until the end of April 2012 you can get a copy of this pattern for free by simply using the code freebie at the check-out. Otherwise, it will set you back three measly dollars.

Get your copy here.