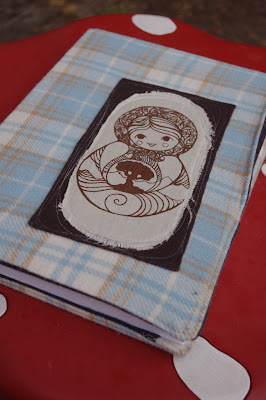 For Christmas last year, my sister gave me this beautiful visual diary that she made. Its cover is woollen  and the beautiful design on the front is one of her own that she has screen printed.  It has such lovely little detail, like the special spot to keep drawing pencils, which she included. 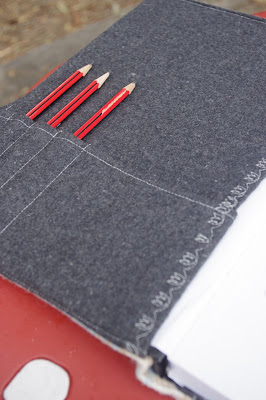 Anyway, I'm embarrassed to say it has sat untouched for the majority of this year.  Why?
Firstly because I've kept a visual diary before for my designs but... eventually my kids attack it and take it over. This is despite the fact that they both have their own visual diaries that they use almost daily!
And secondly, well, I don't think my drawing skills are up to par to do this gorgeous diary justice. It was just a wee bit daunting to approach that first page.

But then one fine day in August, well possibly not that fine given it's Winter here, I for some unknown reason decided to take stock of my patterns in developmental stages. Gulp!  To qualify, a pattern had to have a sketch (no matter how rough), notes, swatch and have been cast on. The list was longer than I expected. I also found that despite owning an iPad, which is where I supposedly keep my pattern notes, I did have sketches and notes spread over three different notebooks.  As I looked through these notebooks I found many many sketches I had forgotten about. Some showed promise. Some had evolved into patterns already. Some were complete rubbish. Many had little people added to them courtesy of my daughter. There were even a few designs she'd added herself in hope.

So I decided the time had come to open and christen my visual diary. 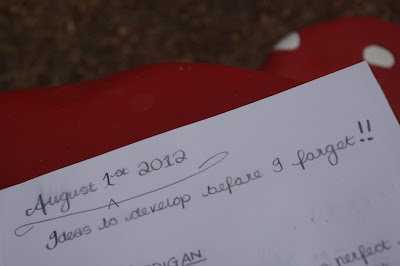 I started with the words, it's always easier for me to begin with words. They come so much easier than drawing.  And then I drew. I sat with my kids and sketched out some ideas; some new and some from my old notebooks. I coloured and drew with my kids and it was all ok.

My sketches, as you can see, are certainly never going to make it to an exhibition, but they're ok enough for me to know what they are.

So if you're wondering how the design process evolves from that spark of an idea. Or in this case, my friend asking me to write a pattern for a hooded vest that she could knit in Noro Kureyon. 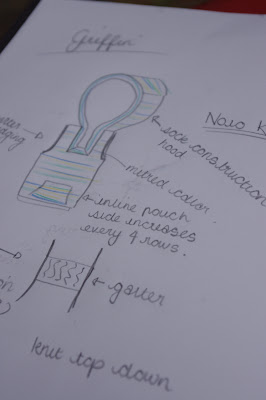 The idea for the mitred neckline came from this blanket that I knit for Toby last year. I see it everyday and I've often pondered how to utilise the mitred look some more. I do really love it! 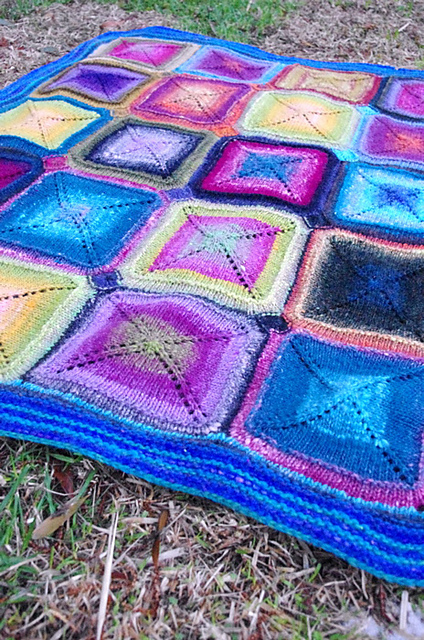 This is the first of my sketches in my new visual diary that has actually transformed into something. I'm really proud of that. So from sketch to garment, this is it!

Griffin knit in Noro Kureyon.
It took 4 balls, or 440 yards to complete this hooded vest for Toby. 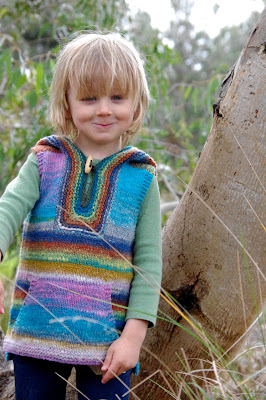 if you want to have a look at some more photos or the details of Griffin, It's ravelled here.
The pattern is currently in testing and will be available in the next few weeks.
Posted by tikki at 4:29 pm 4 comments